It’s January now, and I feel the opposing needs of my body’s evolutionary and cultural pulls:

Culture winds because it keeps me from having to buy (new) larger pants.

So, I was out on Sunday, dutifully braving the windy mid 30s temperatures (I know – in a month or so I’ll dream of temperatures that high), walking my dog.  Usually I don’t expect to see wildlife when I walk the dog because, well, he’s a giant furry predator.

But this Sunday, nature rewarded me for getting out to walk:

I made my first ever positive identification of an American Kestrel (Falco sparverius)! 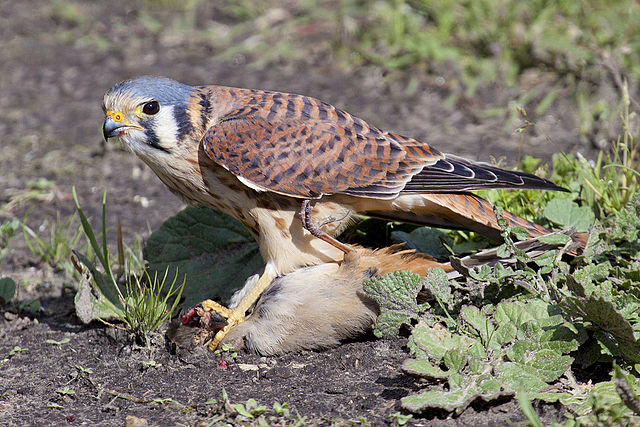 A male American Kestrel (Falco sparverius) standing on prey it has pinned to the ground. Image provided by Bill Bouton via Wikimedia Commons. (The original post on Wikimedia Commons lists this as a female kestrel, but after my research, I believe the photographer got it wrong.)

The dog and I were walking past a fallow corn field when a crow-sized bird swept overhead.  But it didn’t flap like a crow or hold its wings like a crow – or any of the other birds I’m used to seeing, for that matter – so I was drawn to watch it for a little while.

It took up an airborne stance much like a red-tailed hawk “kiting” (see my Hanging Rock post for more info on that); it faced into the wind and held its wings half contracted, using the wind to hold its body relatively still 50ish feet above the ground.  From this position, I know, it was surveying the entire field with its superior vision, looking for a furry little morsel to eat.

I watched for a minute more, trying desperately to pick out field marks from 100 yards away against a bright blue sky. (Oh, how I wished for the awesome new binoculars I got for Christmas.  I’m going to have to start wearing them everywhere – do you think I can get away with it if I call them a “statement necklace”?)  It was difficult, but I was able to make out a rusty red head, a many-banded flared tail, and sharp, angled wings.

Reluctantly, largely motivated by an antsy pooch and a seriously cold wind, I moved on.  By the time we passed back by the field, the kestrel was gone, but those few field marks and some research in my guidebooks helped me not only positively ID the kestrel, but also to fill in the rest of the bird’s story.

Kestrels may be the smallest of our falcons, but they’re fierce and hungry – a big predator in a small package.  They hunt from perches or in mid-air (what I witnessed), searching open fields for small rodents and insects to eat.  They drop down on their prey and pin it to the ground with their talons, eating it right there or carrying it back to a perch to consume.

This choice in hunting method and diet differentiates kestrels from the small hawks (accipiters, e.g. Cooper’s Hawk and Sharp-shinned Hawk) and the other falcons (e.g. Merlin, Peregrine Falcon) because those birds prefer an airborne, avian diet – snatching songbirds right out of the air.  You may see one or all of these species keeping a wary eye on the bird feeder in your yard.  Don’t fret; this is just the energy of your bird feed spreading up the food chain, keeping all of the birds alive in the cold.

Not that a kestrel won’t keep an eye on your feeder if it’s hungry; kestrels are often called “sparrow hawks” due to their taste for house sparrows.  I don’t see them at my feeder because they’d prefer not to land in my back yard, where the ground level is ruled by the aforementioned giant, furry predator.

I was also able to ID the kestrel I saw as a female, for three reasons:

Apparently, female kestrels move south into their winter range earlier than males, and so they get the best territories.  The males are relegated to scrubbier and more forested territories, where they have to compete with the the small hawks and falcons for part of their diet.

Kestrels have a lot of territory to choose from, though, as they make themselves at home in both city and country.  Their smaller size allows them to hunt fewer square miles and still stay well fed.  (Think of them as the daytime counterpart of the Eastern Screech Owl.)

With a little luck, a little willpower, and a lot of warm layers, I’ll walk this trail more often as the winter weeks go by and see this fierce falcon female again soon.

This has been another #10minwri on the Common 10.  To learn more about Common 10 animals, check out:

Sharing the Trails of Virginia and Beyond