The view east-northeast from the Sugarland Overlook just off of the main park road.  The overlook gets its name from the many sugar maple (Acer saccharum) trees found on the slope, which can be tapped for sweet sap that’s boiled down to make pure maple syrup.  The mountains in the far distance on the right are part of the Blue Ridge. 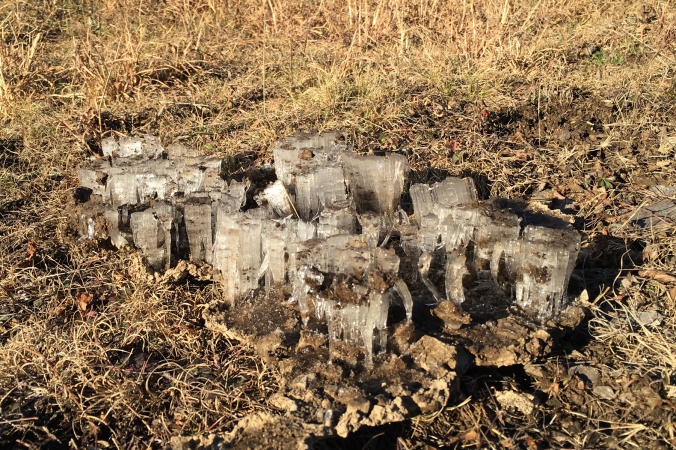 A huge section of needle ice found at the beginning of the Rhododendron Trail and enthusiastically flipped over by my husband and daughter.  These are actually ice columns (“needles”) that have pushed up a layer of soil.  My family was inspired to turn them over to get a better look at these hundreds of miniature ice stalagmites.  Needle ice forms when the ground temperature is above freezing, but the air at the ground surface is below freezing.  Capillary action in the soil pulls water to the surface (or within a centimeter or so of the surface, in this case) where it freezes.  As the process continues, more and more water is pulled up and frozen, growing upward until it either lifts soil particles or raises a section of soil altogether, as it’s done here. 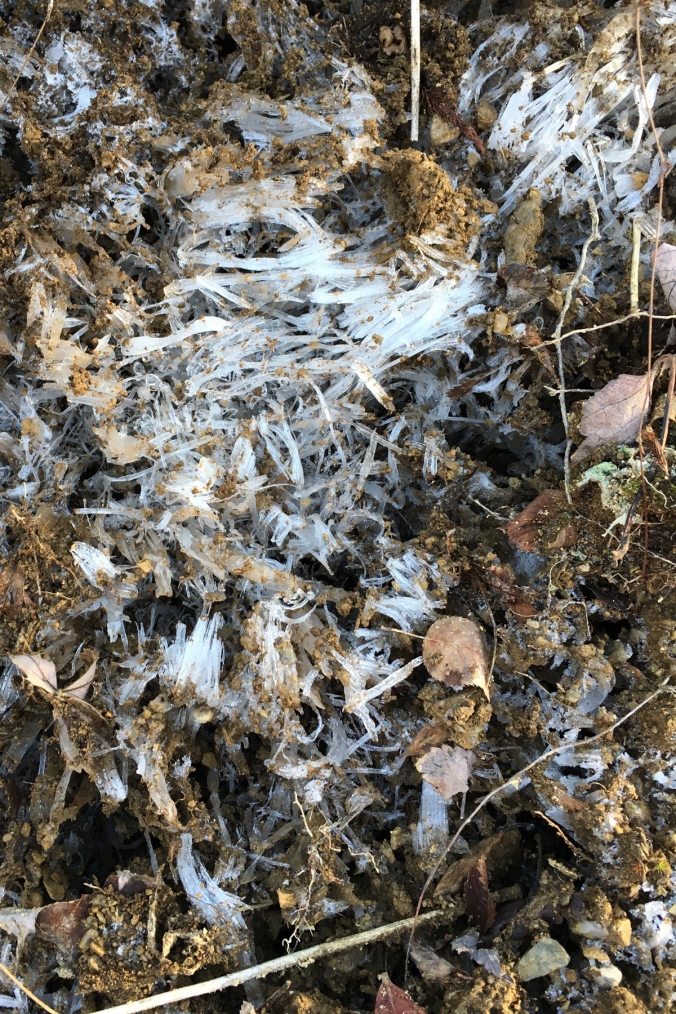 Here we see another batch of ice needles, but these have either penetrated through the soil or been rearranged by other hikers.  Note the interesting curves; to see even more amazing ice formations, search the Internet for images of “hoarfrost” and “frost flowers.”

I count seven “layers” of ridges fading into the distance.  This kind of vista is one of my favorite things about the Virginia Appalachians.  This shot was taken looking southwest from the Rhododendron Trail; somewhere out there is the Virginia/Tennessee/North Carolina border.

This is the first pony we saw, resting in the sunshine about 50 yards off of and not even a quarter mile up the trail.  We were lucky to find several ponies; there are no guarantees that you’ll see part of the 100+ member herd.

Can you see all three ponies?  There’s a black coffee colored pony with a platinum blonde mane on the left, a milk chocolate and cream pony in the middle, and a dark chocolate pony on the right.  They stand about 4 feet tall at the shoulder, though we did see one or two who were a bit larger. 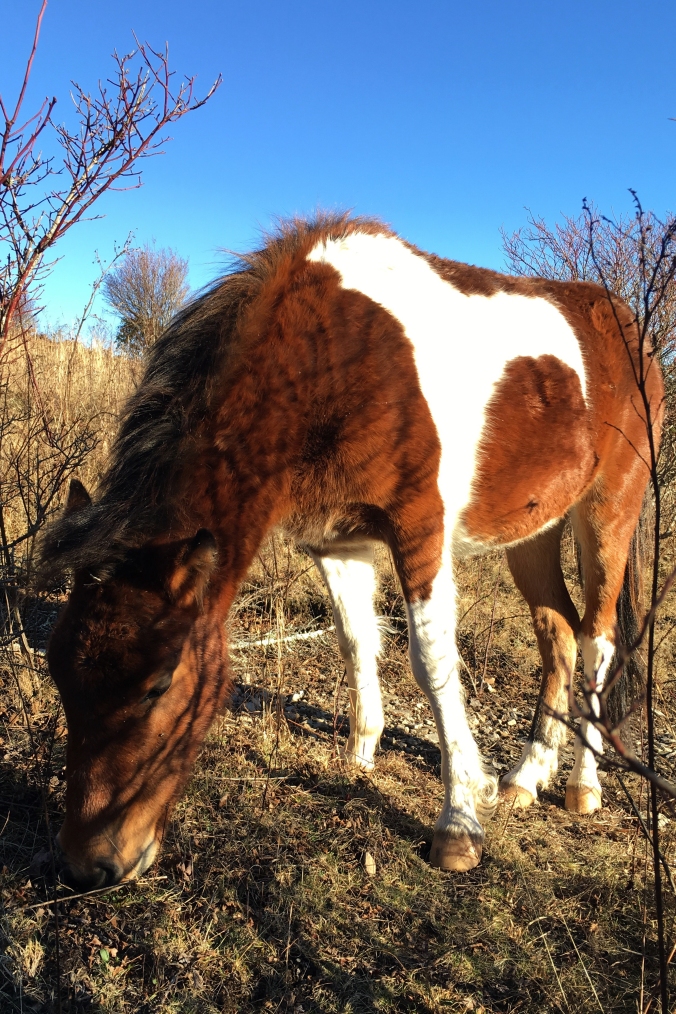 The ponies didn’t seem to mind us getting up close and personal, though park signs warn that they will bite and/or kick if “harassed.”  We followed general rules for safe behavior around horses:  don’t stand behind them or approach quickly from behind, keep hands and fingers away from their faces, don’t touch them in any way that you wouldn’t want to be touched. 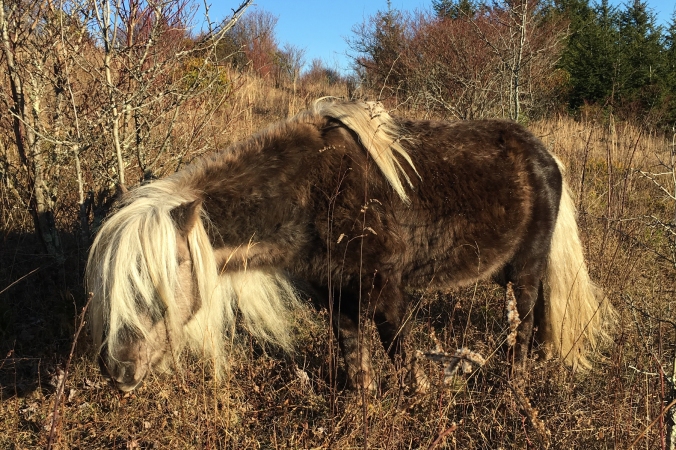 I was incredibly reluctant to let our daughter touch them at all, but in the end, the ponies paid no attention to her careful, gentle petting.  This rockstar pony was the first she touched and the only one I touched.  Her coat was incredibly thick and furry, good for the formidable winters atop the highest mountains in Virginia.  (In fact, Virginia’s two highest peaks, Mount Rogers and Whitetop Mountain, are visible from the park.)

Here are two more ponies we watched, captured with the “Big Pinnacle” peak in the background.  The herd is managed by the Wilburn Ridge Pony Association, who sees to necessary veterinary care for the animals and keeps the herd size steady with annual pony auctions in the fall. 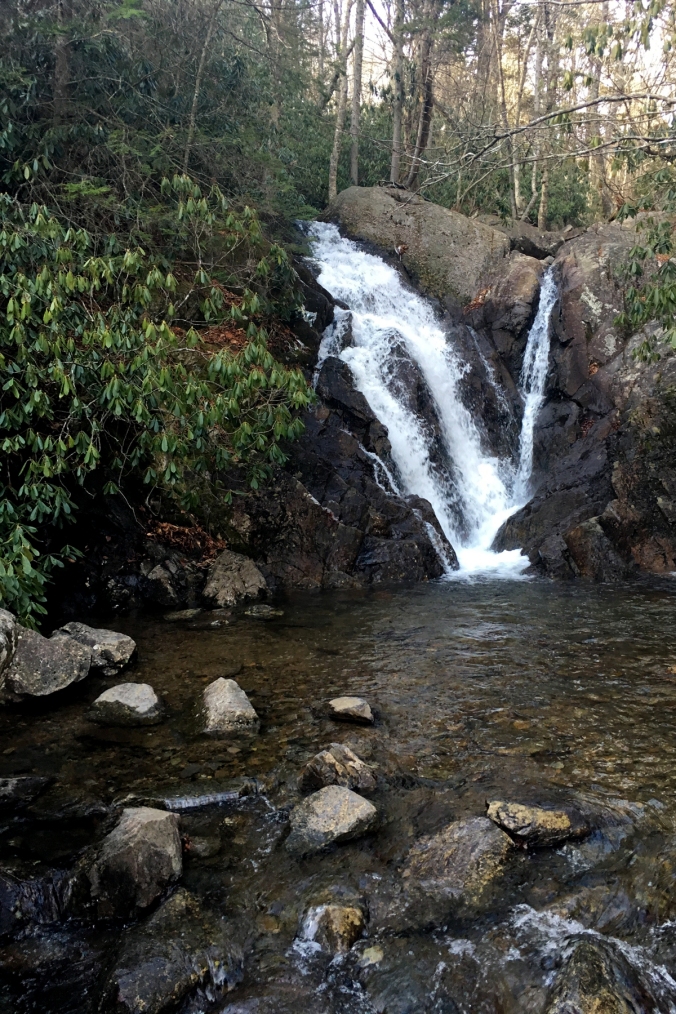 We hiked only one other trail in the park on this visit, but it was the perfect one:  the Cabin Creek Trail.  The trail is a 1.8 mile spur and loop that leads down to (what else?) Cabin Creek and upstream where a series of small falls leads up to this 25 foot cascade.  We sat happily on huge boulders in the middle of the stream watching this falls and dreaming about coming back to the park in summer, when we might dare to wade and even (gasp!) swim in these frigid, crystalline mountain waters.