So, as it turns out, even slime can be pretty.

On two recent hikes, first at the Deerfield Trail and then at the Gateway Trail, my eye was drawn to something startlingly pink among the many shades of brown in the autumn forest floor.

I’ve done some research online and in my handy-dandy Audubon field guide to mushrooms, and I think these are what I found. 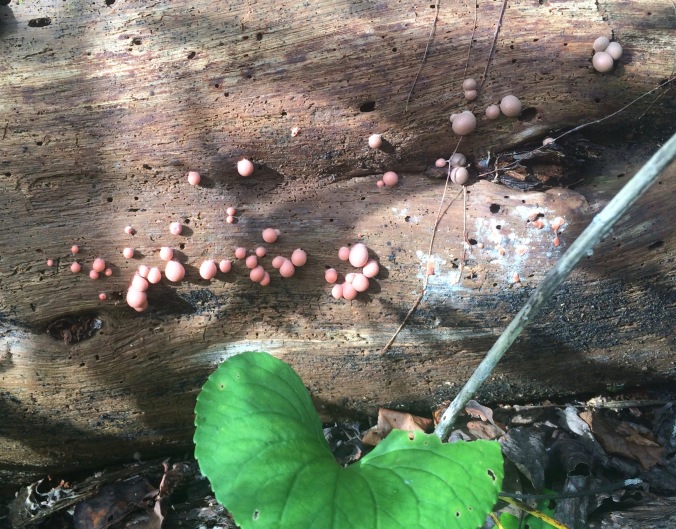 I made no adjustments to the lighting or color of this photograph. Note that the “cushions” of this slime mold can be light peachy pink (center), more intense coral pink (leftmost), or beige with a pink undertone (upper right).

These pink “cushions” are the sporangia stage of a plasmodial slime mold.  Both the  Mushroom Expert website and Audubon field guide report that they are filled with a pink paste.  (I didn’t poke them or cut them open in the field and now I wish that I had!)  The species is also called “toothpaste slime” because of this filling’s resemblance to pink toothpaste.

The slime mold produces the sporangia (cushions) when the environmental conditions change (become sunnier, drier) and it’s no longer a nice, wet place for a fungus to munch.  The sporangia distribute the “baby” slime mold cells, called spores.

Wolf’s Milk cushions are fairly common, usually found on large fallen logs, exactly as I found this specimen, usually May through November (ditto).

Their other, “plasmodial” stage, is really cool!  Plasmodial slimes are flowing, protoplasmic organisms that move and eat whatever is in their path.  They are the original inspiration for creepy movie creatures like “The Blob.” 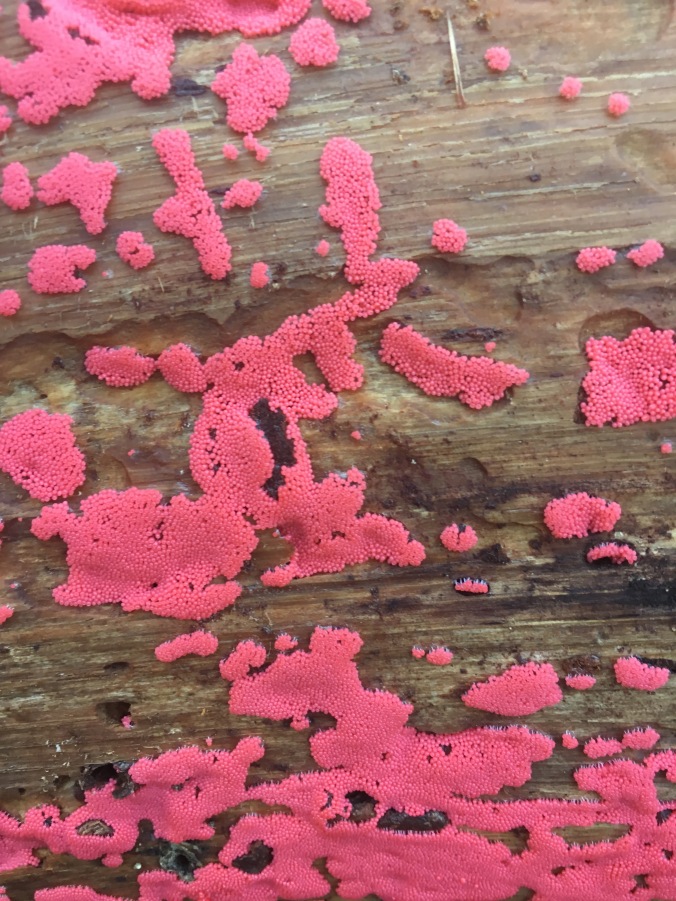 Again, I have made no alteration to the color or lighting in this photograph.  These sporangia are just exactly that hot pink, and each little ball is, at most, the size of a pin head.

Patience.  A naturalist needs patience.  And plenty of time to spend on patience.

I photographed these slime mold sporangia (not that I knew what they were at the time) as I began the hike up the Gateway Trail a few weeks ago.

I snapped the picture and kept moving because 1) It was already mid-afternoon and I had no idea how long it would take me to climb the mountain and 2) the hike was doing double duty as exercise for the body and nature time for the soul, so I had to keep my heart rate up.

If only I could have sat and watched these little pinkies evolve, I might be able to better identify exactly which species of slime mold they are.  The slime molds often complete an entire life cycle (protoplasmic plasmodial stage to sporangia stage to spore distribution and seeming disappearance) in just one or two days.  I could, quite literally, have watched it change phases over just a few hours.

Alas, I did not, and my research leads me to the possibility that they are Hemitrichia calyculata (though other photographers more often describe those sporangia as orange), but not the certainty of it.  All I can say is that they are most likely of the Trichiidae family and the Hemitrichia genus within that family.

I sense, however, that these two little pink puzzles are the beginning of a long and interesting relationship between myself and mycology.  Flowers don’t bloom in the winter, but several species of fungus will grow mushrooms as long as the temperature is above freezing.

Winter can get pretty gray and bleak around here, so the prospect of pretty pink (or purple, or blue, or orange, or yellow, or red. . .) in the next few months, even if it’s “slime”, will keep me out and adventuring, looking in the leaf litter for little miracles.

Special Note:  I am no mycologist, but even I know that you never, ever eat a wild mushroom without having a certified expert on hand to identify the species and ensure that the fungus isn’t deadly poisonous, because many of them are!

One thought on “Pretty in Pink”