I volunteer at the local nature center on Friday mornings, teaching preschoolers all about nature.  It is the highlight of my week, surrounded by the chaos of toddlers and tiny-legged runners, all ready to absorb and love whatever I enthusiastically share.

So, of course, in return for this love and mutual enthusiasm, I make them hold creepy crawlies.

Well, I don’t technically force them, but I do encourage and help (and cajole and convince) a lot.  In fact, I’ve gotten so many kiddos on board the “Creepy Crawlies are Cool” train that it’s become an expected part of our Friday mornings.  We play lots of different games in the nature center yard, but we never, ever forget to roll over a few of the logs and have a look underneath.

And here’s what we find:

A girl less than two years old holds an earthworm for the first time. She was mesmerized!

I love worms.  There, I said it.  Worms are amazing creatures not only for what they do – decompose organic matter such as dead leaves and turn it into rich soil – but also for their kid-friendly pick-up-ability.  (It’s my blog, I’ll make up whatever words I want.)  Worms do not bite or sting.  Worms do not even look like they could bite or sting.  They are not covered with scratchy scales or poky hairs; they are smooth and cool and wiggly.  And, when you put a worm in the hand of a little kid, it’s practically guaranteed that their eyes will grow wide and a joyous grin will spread across their chubby cheeks.  They’re doing it!  They’re holding a wild animal!  And it is awesome.

I have not yet captured a satisfactory picture of the ants we find under logs, so instead I’m sharing this photo I took of ants on a peony blossom. Ask any gardener – if you want a peony bud to blossom, you’d better have ants attending it!

Sometimes when we roll over a log we’ll find a colony of ants or termites busily moving around their underground nest.  Usually they are busy moving eggs.  Here in Virginia, we don’t have the invasive, biting fire ants that are common throughout much of the deep south, so we can feel fairly safe to squat down and observe the ants up close.  I would NOT have attempted that in our previous homes in Texas, Florida, or Louisiana!  A few amazing ant facts: 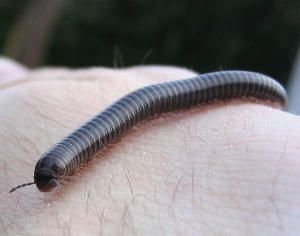 This great close-up of a millipede on an adult hand was captured by Darkone and provided via Wikimedia Commons. To hold a millipede, pick it up by gently pinching it between two fingers and place it on the open palm of the holder’s hand. The millipede may coil up, a natural defense mechanism, but will soon uncoil and walk all over the hand. I like to have the preschoolers count seconds till the millipede opens.

The millipedes we find under logs in the yard are almost always much smaller than the millipedes featured in my previous post, A Moment for Millipedes.  They vary in size from about a half inch to one and a half inches, are about the width of a piece of acrylic yarn, and are so light that usually you can’t even feel them walking around on your hand.  Millipedes do not bite or sting, and are incredibly important to the ecosystem because they eat and break down dead vegetation such as fallen leaves and rotting logs. Some memorable millipede facts: 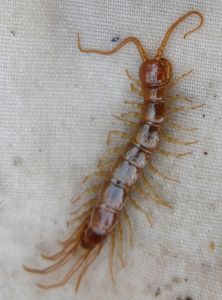 This looks most like the centipedes we find under logs. Not much bigger than the millipede, but with that orange/brown color and legs that stick out to the side. This photo was taken by Thomas Quine and provided by Wikimedia Commons.

What’s the difference between centipedes and millipedes?  There are many differences, but as a children’s nature teacher, the one I find most important is that centipedes can bite.  I have never been bitten, though I’ve had them crawl over my hand, but I still don’t advise picking them up.  The gentle pinch required to lift them may feel like an attack to a centipede (much like when King Kong picked up Fay Wray) and they may bite in defense.

Centipedes we find under logs also looked markedly different from the millipedes, so it’s easy to know which creatures to leave alone.  The centipedes have a decidedly orange tint to their exoskeleton, and their legs (one pair per body segment, if you’re counting) stick out from the sides of their bodies, whereas millipedes legs are neatly tucked beneath their bodies.

Centipedes are the hunters of the under-log world, and therefore move much faster than herbivorous millipedes.  (Carnivores need speed to attack.  A good comparison for centipede vs. millipede speed would be a wolf vs. a cow.)  Centipedes will eat small insects, snails, slugs, and worms.  A celebratory collection of centipede facts:

In my greedy hand I hold not only a slug with partially-extended eye stalks, but also a light brown millipede crawling around the slug and a June beetle grub curled up next to it. Yes, I am one lucky nature teacher!

Ahh, the invasive leopard slug (Limax maximus).  Foe of the gardener and friend of the toddler who doesn’t mind slimy hands.  (The look on their parents’ faces when the tots joyfully hold up a palmfull of slug is excellent.)  We find lots and lots and lots of leopard slugs under logs.  These non-native creatures have done incredibly well here in the U.S., despite my mother’s valiant attempts at trapping them with old margarine tubs half full of my father’s Pabst Blue Ribbon.

I don’t grow veggies, so they don’t bother me much, and I have to admit to even liking them a bit after falling in love with the slug character Mub in the animated kids’ film Epic.  (Mub’s friendly insult to one of the human-like “leaf men”, calling him a “flat-face” was, in itself, epic.)  I encourage the kiddos to hold the slugs until they relax and extend their eyestalks.  Eyes at the end of long, antennae-like, telescoping appendages are just plain cool to kids of all ages.  Some super slug facts: 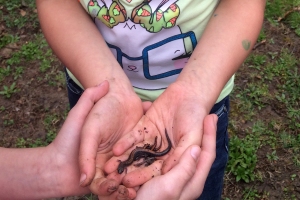 Queen of the Salamanders holding three Eastern red-backed (Plethodon cinereus) salamanders in her hand. She and her BFF, whose hands are just beneath hers, spent the morning catching the slippery fellows and sharing them with the younger kids. They were very careful to put the salamanders back in the moist leaf litter before their skin dried out.

In wet, cool weather, rolling logs and lifting the leaf layer on a forest floor may get you a glimpse of a salamander.  They are fast little creatures, and sunlight means danger in their world (a number of predators find them quite tasty, and to be seen is to be lunch), so it takes practice to snatch one up before it darts off and hides again.

I am, as I’ve said, very lucky when it comes to nature, though.  In this case, it’s because my daughter is a nature girl, too:  my daughter is Queen of the Salamanders.  She finds and catches them all over the place!  In one day at the Nature Center she caught a half-dozen!  I am one puffed-up, proud mama.

A selection of superlative salamander facts:

There are many, many more species to be discovered in and under rotting wood (this is why woodpeckers are always pecking holes in dead trees – there’s a buffet under the bark) but I think we’ll leave it here for now.  Today is National Get Outdoors Day, and that’s exactly what I’m going to go do!

One thought on “Looking Under Logs”