The only time I’ve spent outside in the last two days has been weeding.  Unacceptable.

So, this morning I put off my chores (they’re eternal anyway, so what’s another half hour) and strode out of my doorway and down to the Hethwood Pond.

It’s a small, neighborhood pond; a full lap around the paved path is only about one fifth of a mile, but it sure packs a lot of wildlife punch!

I made just one lap around the pond and saw species from five of the seven classes of animals:  birds, mammals, reptiles, fish, and insects. (I stayed on my feet and off my belly, so I missed the amphibians and arthropods this time.)

I photographed and took videos with my iPhone all the way around the pond, but only a few turned out.  Wild animals do not like anything that looks like an eye – either my large sunglasses or the small circle of the iPhone camera lens – pointed at them and they run/fly/dive for cover pretty quickly.

I’ll include the ones that pass the quasi-visible bar with my descriptions below, and rely on wonderful Wikimedia Commons for the rest. 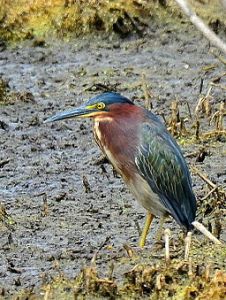 This beautiful photograph of a green heron was provided by By CheepShot (Green Heron) [CC BY 2.0 (http://creativecommons.org/licenses/by/2.0)%5D, via Wikimedia Commons

The first fellow I saw was a green heron (Butorides virescens) stalking the large rocks that line the pond’s edge, focused on tiny fish beneath the water’s surface, ready to spear his next meal.  Though I knew we had a resident green heron at the pond, actually seeing him still makes me suck air with surprise and delight.  I should have held still and just watched, but I wanted his portrait badly, and my approach scared him up into the overhanging willow nearby.  When I finished my lap, he was hunting from a muddy bank in the shade under that same willow.  Unfortunately, his feathers, which are bright teal green and blue in the sunlight, blended in perfectly with the gray-brown mud.  This isn’t because the mud was covered with green algae, but because blues and greens seen in bird and butterfly wings in nature don’t come from pigment, but from the way light is refracted through specialized color cells.  No light, no green.

My next close encounter came maybe 25 yards later when I came upon the resident Canada goose (Branta canadensis) pair and this season’s clutch of goslings picking through the grass around one of the pond’s picnic tables.  The goslings are still in their fluffy feathers.  They’ll be fully fledged in a couple of weeks, though, and by mid-summer they’ll be so big that you can’t tell them apart from their parents. 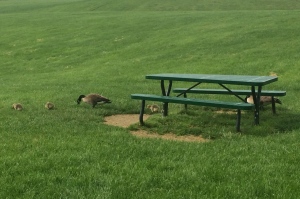 There are five goslings – can you find them all? It shocks me how well animals can hide even in “plain sight”.

Canada geese are considered by many to be an invader and a nuisance, but they’ve been a regular sight at every pond I’ve visited since I was little, so I’d say they’re here to stay.  You’ve got to admire their reproduction skills, anyway – handling five wandering kids is no small feat – that’s one strong parenting team!  Geese often, however, become accustomed to humans with bread in hand, and that’s not a great thing – geese can be aggressive at times (like when they have goslings) and will most certainly bite the hand that feeds them.  If you’re with kiddos, let them know that these are a watch-but-don’t-touch animal.

Rounding the back side of the pond I very nearly managed to photograph a chipmunk.  Or, rather, she fooled me into thinking I was quicker than I am by freezing for just long enough in her perch upon a large rock that I actually looked down at my phone to open the camera app.  When I looked back up she was, of course, gone.

There are several Eastern chipmunks (Tamias striatus) living around the pond in tiny burrows under the mid-sized rocks at pond’s edge.  They scavenge in and around the waterline for fallen nuts and seeds and other bits of plant to eat.  They’re not strictly vegetarians, though, and will also stuff their cheeks with insects, mushrooms, and worms.  The three or four I encountered this morning were none too pleased at having their foraging interrupted, though, and sounded the alarm call to all of their neighbors with regular, high-pitched squeaks from the safety of their burrows.

After conceding the race to those cute little rodents, I focused my attention on the shallow corner of the pond where I thought there might be a turtle or two.  And, lucky me, there was a nice, big snapping turtle (Chelydra serpentina) just waiting for me there.

This is my (sad) shot of the snapping turtle at the corner of the pond. Even after considerable digital editing, you can’t see as much of the turtle as I’d like. Not only does surface reflection interfere, but the turtle’s back is covered with muddy algae that helps it blend in with the bottom of the pond.

This particular corner of the pond seems to be prime territory for spring breeding.  I’ve seen snappers in past springs fighting in this corner.  Or maybe they weren’t fighting. . .  Anyhow, the fastest way to identify a snapping turtle is by noting its comparatively huge tail; it looks like somebody

sewed the tip of an alligator’s tail onto these guys in place of a regular, diminutive turtle tail.  These, too, are a watch-but-don’t-touch animal.  Their snapping mouths are powerful enough to break an adult finger easily, and they know it. 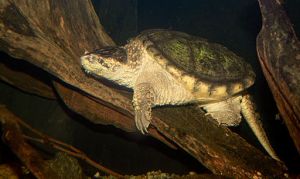 A great shot of the common snapping turtle by By Brian Gratwicke [CC BY 2.0 (http://creativecommons.org/licenses/by/2.0)%5D, via Wikimedia Commons. Kudos to Mr. Gratwicke for the great shot, and to the heavy turtle for hauling himself all the way up onto that branch!

I have friends who have successfully caught them, but please bear in mind that a) these friends know what they’re doing and b) not all of my friends are rocket scientists.  Even I can claim to have held a snapping turtle, but only because last spring a hatchling no bigger than the palm of my hand was crossing the paved path to get back to that same corner of the pond and I carried it down to the water so that it wouldn’t get squished by big, fat foot or big, black bike tire.  Still, I picked it up carefully with one finger on either side of its shell, far enough back that the mouth couldn’t reach!

And, just 10 or so yards after the snapping turtle, I met a smaller, friendlier turtle who was kind enough to swim toward shore to see me.  I still didn’t get a good photograph, but based on its few, bright markings, it’s slightly domed and smooth-edged carapace (shell), I think it must have been an Eastern red-bellied turtle (Pseudemys rebiventris)

Before I reach the end of my lap and my last picture, I should cover two of the classes I promised:  insects and fish.  First (and least, unfortunately) come the fish – the neighborhood has stocked this pond with large, bright orange goldfish.  They are beautiful and, based on my childhood adventures in fish keeping, will survive just about any water conditions.  Still, I wish I saw more sunfish and other natives in the pond.  Goldfish are a small type of carp (Carassius auratus) that are native to Asia.  There are also lots of tiny minnows in this pond that will churn the water up anytime a crumb of bread or toddler’s enthusiastically tossed Cheerio hits the surface.  I haven’t identified which species they are, though.  I need a dip net with a long handle.  (Hmmm. . .Mother’s Day is coming up.)  Though the turtles will snatch those human-offered food chunks up, they’d much rather have the little minnows!

As for insects, the most prominent species around the pond and in my garden right now are the bumblebees.  Bumblebees are members of the bee genus Bombus, and we have at least 12 different species of bumblebee living in Virginia, according to bumblebee.org.

Three of the ten ducklings that this mallard mom and dad are raising are easily visible in this picture. It was only later, when the family hurried past me, that I was able to count all ten.

To finish up this one wonderful lap, which took me no more than 15 minutes including stopping to take pictures, I observed our resident mallard ducks (Anas platyrhynchos).  Show-off dad with his bright green head and camouflaged mom with her pop of blue wing bar were herding no less than 10, yes 10, fuzzy yellow and black ducklings at the side of the pond.  Talk about parenting and survival skills – this pair of adults will have to try to help these chicks survive hawks and falcons that might attack from above and, when they’re ready to swim, snapping turtles that might attack from below.  Duck meat is high in fat and tasty to all sorts of animals, not just humans.  Note again in this picture, the emerald green of the male’s head plumage is much less bright when not in direct sunlight; just like the green heron’s feathers, no light, no green.  In species of birds where the male looks different from the female (called sexual dimorphism by scientists and nature nerds like me), the male is usually much flashier.  Wildlife scientists have it pretty well decided that it’s the job of the males to impress the ladies with feathers and nests and offerings and songs.  The ladies bring camouflage to the relationship so that when they sit on the nest, they are as invisible to predators as possible.

Luckily, though my camera wasn’t able to capture everything I saw and, more than that, heard (the birdsong is fantastic down there, too) these pond creatures weren’t invisible to me.  Next time I’ll make my one lap even slower to see what else I can see!

PS – Though the walk took only 15 minutes, the writing of this has taken 75!  Ha!  Chores, schmores.

3 thoughts on “A Lap Around the Pond”